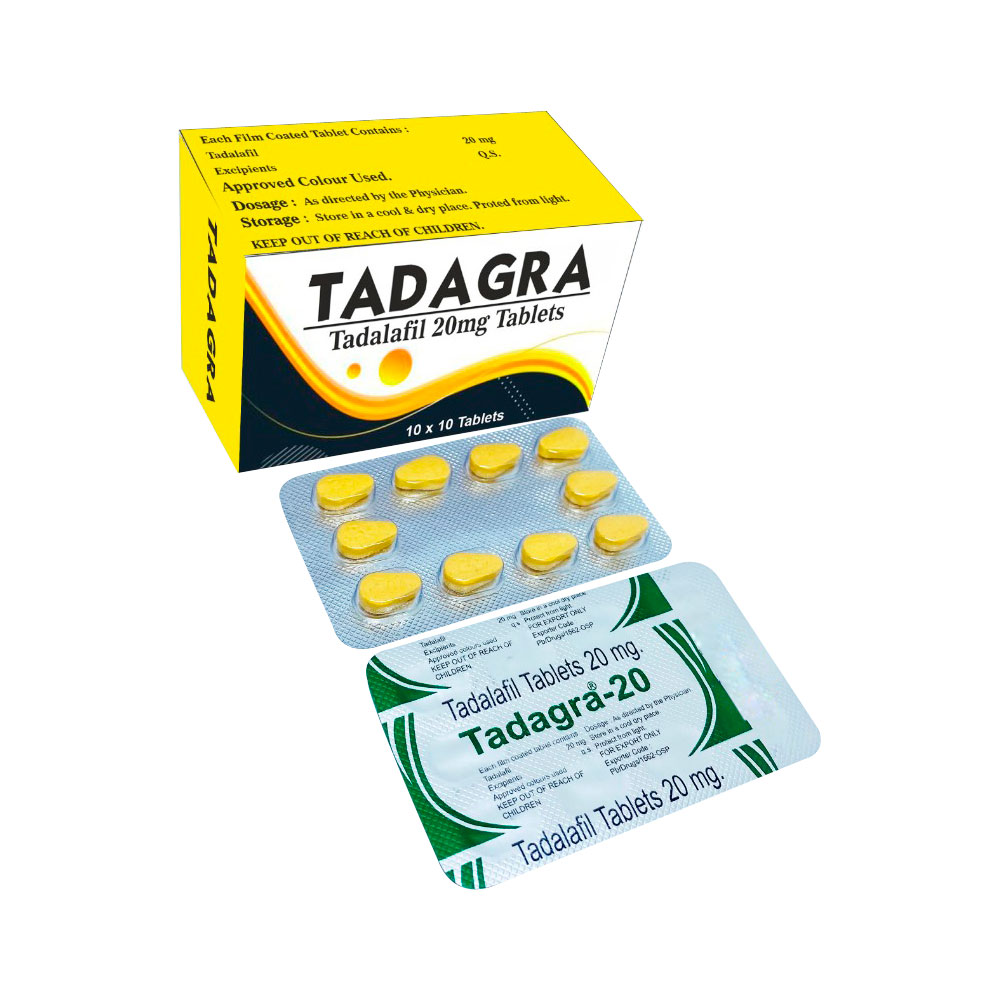 Tadalafil 20mg (Tadaga 20mg) is an oral treatment for erectile dysfunction, which offers the longest performance period on the market, when taken 30-60 minutes before intercourse it can last up to 36 hours. These Tadalafil 20mg Tablets are safe to use as they are prepared using high grade ingredients has no other alternative available in the market, in terms of effective results and quick relief. It is a fast dissolving tablet and offered in a blister pack. Besides, RSM Enterprises is one of the most prominent Tadalafil 20mg Pills Manufacturers, Exporters and Suppliers from India at best prices.

Tadalafil 20mg Tablets are used to treat the physical problems of erectile dysfunction in men. These tablets are safe to use and effectively cure impotence and diseases associated with PDE5 inhibitors. These oral drugs are effectively used in the treatment for ED disorders in men assuring erection for longer duration of time.

Who should not take Tadalafil 20mg Tablets (Tadaga 20mg) ?

Do not take Tadalafil 20mg Tablet, if either anyone has allergies or taking any form of nitroglycerin or those who have had a heart attack, stroke, severe high or low blood pressure or life threatening heart irregularities. This drug does not protect against sexually transmitted diseases (such as HIV, hepatitis B, gonorrhea, syphilis). Keep in mind, it is not for persons with conditions such as sickle cell anemia, multiple myeloma or leukemia. Seek medical advice with genital deformities such as Peyronie’s disease; also if you have a bleeding disorder, peptic ulcer, or retinitis pigmentosa.

Tadalafil 20mg Tablets is a prescription medication, one needs share the medical history with a doctor to make sure it is an appropriate treatment. Do not take more than once daily and consult your doctor or pharmacist for more information.

Some side effects of Tadalafil 20mg Tablets (Tadaga 20mg) :

These are primarily used to treat erectile dysfunction in men, but yet there some rare side effects have been recognized which are Headache, flushing, stomach upset, nasal stuffiness, diarrhea and dizziness might occur. If these effects persist or worsen, notify your doctor promptly. For person with cardiac problems, the side effects can be severe. Before purchasing any impotence pills at all, it is highly advisable to consult a doctor and let him or her decide, if synthetic drugs are the best treatment for you.