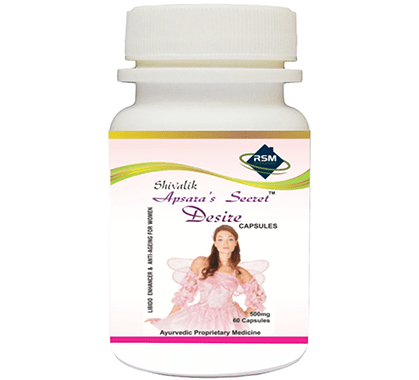 In Indian mythology Apsaras reside in heaven and they always remain young and sensual. For centuries Indian society has been dominated by males and that is why many herbal and drug companies have focused only on manufacturing products to help men to have better sex. It is a fact that in India nearly 85% women experience little or no sexual pleasure with satisfaction during intercourse.

·         Cures frigidity due to Menopause and other reasons.

For women, life today is tough and demanding, the dual workload of home and office has detrimental effects on your sexuality. Constant stress deteriorates general and sexual health which worsens the problems and both professional and personal life starts suffering.

It has following ingredients which combine to combat all above mentioned problems:

Shudh Shilajit:  Shilajit is one of the most potent and unique rejuvenators.  It speeds up body metabolism and has anti-aging qualities. Shilajit is also a strong Aphrodisiac.

Ashwagandha Extract: Ashwagandha used for sexual vitality. It increases human body's resistance to stress, trauma, anxietyand fatigue It is also popularly known as Indian Ginseng. It is a powerful Rejuvenator and Nervine. Ashwagandha is also known for its anti-aging qualities

Shatavari Extract: Shatavari regulates hormonal secretion. It is especially helpful in combating menopausal and post menopausal problems and is a good Aphrodisiac for women.

Majith: Root of Majith has astringent, anti-bacterial, anti inflammatory and diuretic properties. It is helpful in Recurrent Urinary Tract infections

Ashok Chhal: Ashok Chhal has stimulating effect on the endometrium and ovarian tissue and is useful in menorrhagia due to uterine fibroids, in leucorrhea and in internal bleeding. It is useful in all cases of uterine bleeding due to fungal infection.

Kapi Kachhu Extract: Kapi Kachhu is a good sex tonic. It increases ovulation in women. It prevents female sterility and acts as a nervine tonic.

Kesar: Kesar is a strong aphrodisiac and rejuvenator. It has very strong anti-aging qualities and makes you face glow naturally. Kesar also has stimulant properties and speeds up body metabolism which results in good overall health.

Ginseng Extract:Ginseng enhance libido and copulatory performance. These effects of ginseng are not due to changes in hormone secretion, but are direct effects of ginseng, or its ginsenoside components on the central nervous system and gonadal tissues.

Dosage: 1 capsule twice daily with milk or as directed by physician.

Caution: Not to be taken during pregnancy, periods and lactation.